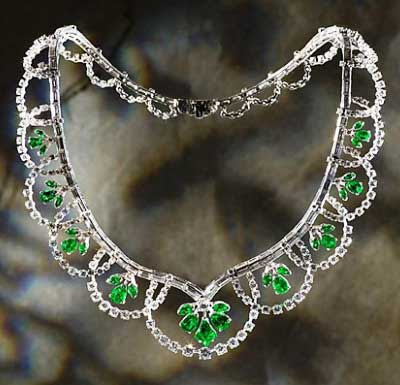 What does this brooch have to do with the Highwaymen?

Raymond C. Yard used the highest quality gemstones and the most exquisite platinum mountings to create some of the most magnificent jewels in the Country, worn by clients such as the Vanderbilt’s, DuPont’s,’ Woolworths,’ and even movie stars including Douglas Fairbanks and Joan Crawford.   Today the Yard name is synonymous for the highest standards in fine jewelry.

He created the most magnificent jewels in the Country.   In recognition of how Yard elevated Art Deco jewelry to a new level, in 2008 Natasha Kuzmanovic, with an introduction by David Rockefeller, wrote the hardcover book: “Yard: The Life and Magnificent Jewelry of Raymond C. Yard.”   David Behl was the photographer of Yard’s jewels.  Behl has been a master photographer of the world’s finest jewels for over 20 years.

The reason BacKus deserves so much attention is that he was the genius behind the Highwaymen. Not a Highwayman himself, he inspired them and was their mentor.   Born in 1906, BacKus, according to the BacKus Museum and Gallery in Fort Pierce, “after Winslow Homer, he was one of the few artists in the early 20th Century to depict Florida’s rugged beauty on canvas.   There is a great deal of misinformation about BacKus’ role in teaching art to a wide range of students.  While he did teach many students, it was Alfred Hair who was the one who primarily taught the loosely allied group of African-American artists who hastily created rendered images of a fantasized Florida.

Gary Monroe, professor of fine arts at Daytona State College, author of numerous Highwaymen books, including the Seminal, The Highwaymen: Florida’s African-American Landscape Painters (UPF, 2001), and who has been recognized with numerous exhibitions and fellowships, told me there is really “nothing new” about the Highwaymen’s story. What is significant, however, Mr. Monroe points out “is that it happened like spontaneous combustion; it was born complete and ripe for the telling.” 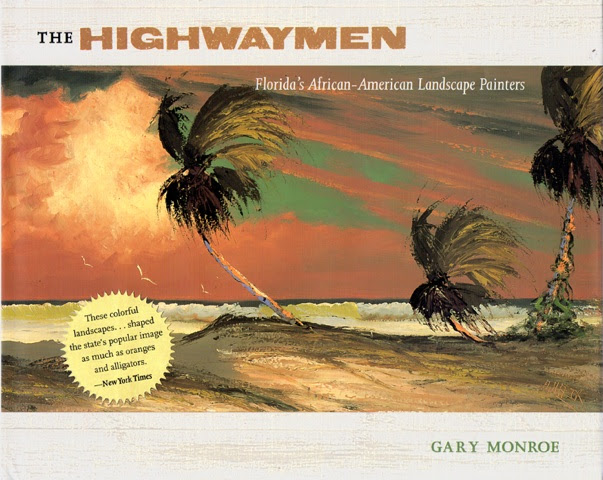 “A number of factors led to the Highwaymen phenomenon; there was a convergence of factors – the 26 young African-Americans who seized opportunity when others felt the extremes of social alienation; an all-inclusive Caucasian, Bean Backus, who was also the epitome of a regionalist; and the times themselves contributed to the success of the Highwaymen.

It was an optimistic era with many young families establishing themselves in the Southeast region of Florida, and the Highwaymen paintings were like extreme welcoming-wagon gifts.”

In writing this article, we questioned if it was hoe hum; that everyone already knew about the Highwaymen. But Mr. Monroe, who is a very popular lecturer with the Florida Humanities Council’s Speaker’s Bureau (his presentation is made available through FHC to Florida-based non-profit organizations), said when he begins his talks he asks by a show of hands who has heard of the Highwaymen, and its barely about half.

Harold Newton, who’s painting is illustrated below, produced 30,000 paintings.  If you assign a market value of $ 3,000 to each painting = $ 90 million.  Newton died penniless.   The Highwaymen have produced over 250,000 paintings.

The only woman Highwaymen is Mary Ann Carroll.  After years of obscurity, in 2011, she was invited to an exclusive First Lady’s Luncheon, where she presented Michelle Obama with a painting of her iconic Poinciana.   Mary Ann Carroll made a name for herself in a man’s world while struggling to provide for her family.

Mr. Monroe’s recently released book, Mary Ann Carroll: First Lady of the Highwaymen, tells her story with grace and insight.   In 2004, Gary Monroe successfully nominated the Highwaymen to the prestigious Florida Hall of Fame, a function of the State Department in Tallahassee. 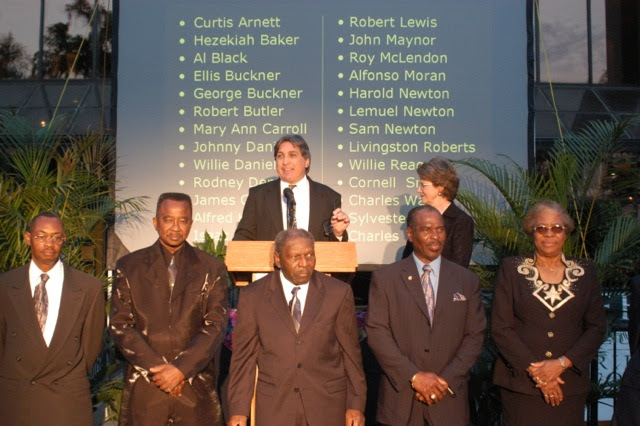 Here are three Highwaymen paintings from, perhaps, the most prominent collection in Vero Beach. 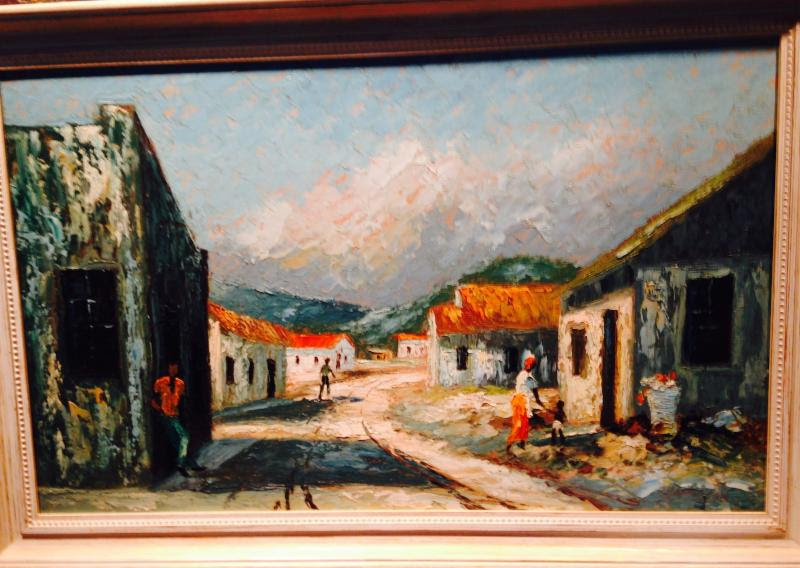 Harold Newton – The significance of this painting is that depicts people 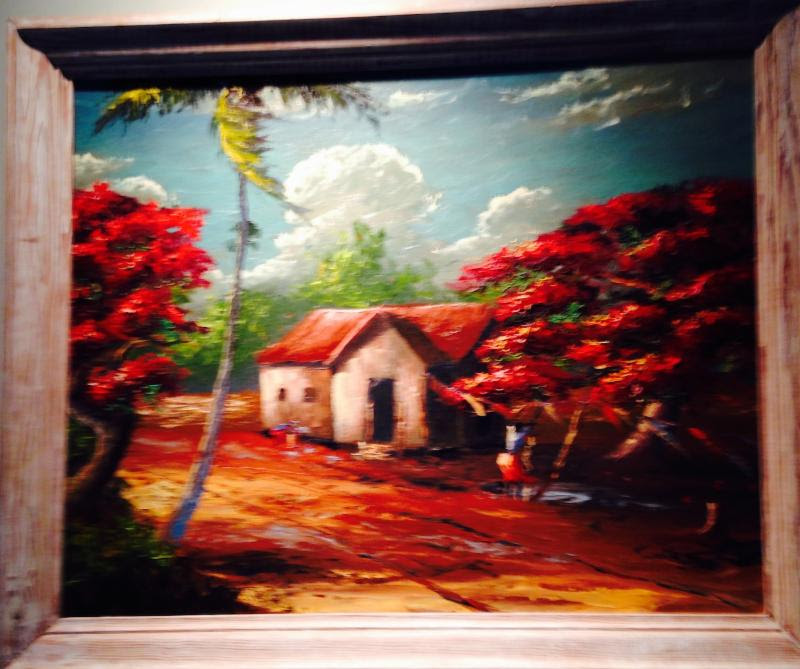 Ray McLendon – Once again, a painting depicting a person 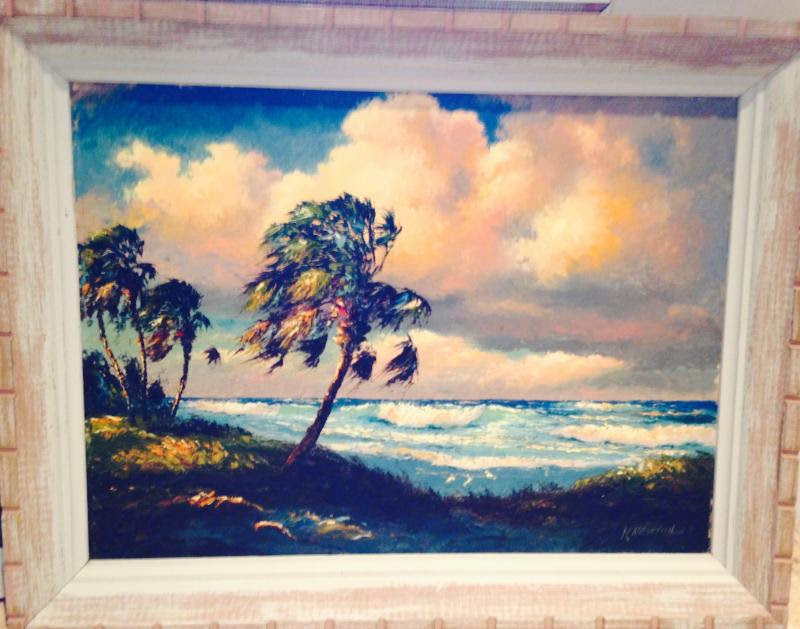 Alfred Hair (A. E. BaKus’ student)
In conclusion, and this is important, Gary Monroe wrote: “Tom, The necklace is a creative way to segued from it to the paintings. But it’s only slightly relevant to your story… the Highwaymen phenomena. All best, G”