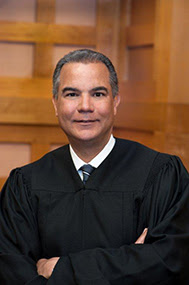 Federal Judge Christopher R. “Casey” Cooper
On the eve of the hearing before Federal Judge Christopher Cooper on the Indian River County’s Motion for Summary Judgement, a Temporary Restraining Order and/or a Preliminary Injunction against Roger Rogoff (Under Secretary of Transportation) and the Department of Transportation over their authority to empower the Florida Development Economic Corporation to issue Private Activity Bonds in favor of All Aboard Florida (AAF), we thought it appropriate to provide three articles relative to Judge Cooper, the safety of AAF and their original application for Federal funding.
President Obama nominated Attorney Christopher Cooper to serve as a United States District Judge of the United States District Court for the District of Columbia on August 1, 2013. His appointment followed a recommendation from Congresswoman Eleanor Holmes Norton.
Ironically, Congresswoman Norton is a member of the U.S. House Committee on Transportation and Infrastructure, of which there is a Subcommittee overseeing the regulation of railroads by the Surface Transportation Board, including economic regulations; Amtrak, rail safety and the Federal Railroad Administration.  It also oversees the Pipeline and Hazardous Material Safety Administration within the Department of Transportation responsible for the transportation of hazardous materials.
In recommending Attorney Cooper, Congresswoman Norton said:  “Christopher Cooper’s outstanding background and criminal and civil experience stood out even among the exceptionally well-qualified candidates who came forward.  I have every confidence that he will continue along the path of excellence that has characterized his entire career.”

Congresswoman Eleanor Holmes Norton
Following his nomination by President Obama on August 2013, Attorney Cooper was unanimously confirmed the the U.S. Senate in March 2014.
Judge Christopher Cooper received a B.A., summa cum laude, from Yale University in 1988.  He went on to graduate in 1993 from Stanford Law School with distinction, after serving as President of the Stanford Law Review and as a board member of the law school’s pro bono legal clinic.
Prior to his confirmation as a United States District Judge, Attorney Cooper was, since February 2012, a partner at Covington & Burling LLP.  In private practice he represented individuals and corporations in a wide range of litigation matters, working in Washington and London.  He specialized in defending white-collar criminal matters; conducting internal corporate investigations of alleged fraud and corruption.
On it’s website, Covington & Burling LLP indicates: “What sets us apart is our ability to combine the tremendous strength in our litigation, investigations, and corporate practices with deep knowledge of policy and policymakers, and one of the world’s leading regulatory practices. (emphasis added)
On its website you are able to search for clients and Fortress Investments did not come up.