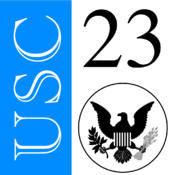 This is complicated and we will do our best to explain explain how Title 23, United States Code, may be another avenue for All Aboard Florida to get its Private Activity Bonds.
The Internal Revenue Code allows highway and freight transfer facilities as types of privately developed and operated projects for which private activity bonds (PABs) may be issued.
The Transportation Infrastructure Finance and Infrastructure Act (TIFIA), authorized in 1998 is the act that allows credit assistance for qualified projects of national significance.
They are issued under Title 23, United States Code.
If qualified projects have “previously” received credit assistance under this program, they qualify for PABs.
Qualified projects for PAB’s:
Qualified highway or surface freight transfer facilities include:
– Any surface transportation project which has received assistance under Title 23, US Code (as in effect on August 10, 2015)
Private Activity Bonds and TIFIA:
Any surface transportation project which receives Title 23 assistance is qualified to benefit from Private Activity Bonds.  Because projects that receive credit are Title 23 projects, this means that TIFIA projects are also eligible to receive tax-exempt bonding authority.
This provision therefore extends eligibility to FIFIA-assisted transportation, intercity bus or rail facilities and vehicles, including vehicles and facilities owned by Amtrak, public freight facilities or private facilities providing public benefit for highway users, and intermodal freight trains or facilities.
Together, TIFIA and Private Activity Bonds should provide substantial incentives for private equity investment in highway and freight projects.
Title 23, US Code:
Title 23 is 303 pages.  But on page 103 it indicates Title 23 funding applies to identification of “hazardous locations (including …railway-highway crossing needs…) that constitute a danger to motorists (including motorcycles, bicyclists, pedestrians and other highway users.)”
If All Aboard Florida had received Title 23 funding, it would quality for Private Activity Bonds.
Attorney Stephen Ryan, representing Martin County at the May 29 hearing explained that no one at DOT could produce documentation proving that AAF had received Title 23 funding, a prerequisite of getting PABs.  He was able to find documentation where $ 9 million Title 23 money was provided for safety improvements to the Florida East Coast Railway ( FECR) Corridor, but not the AAF project in 2009 BEFORE AAF was in existence.
And here Attorney Stearns, representing DOT and AAF said that AAF existed in 2007 (the year Fortress purchased FECR) and at that time passenger rail was planned for the route and the Federal money was spent to make it more safe, not freight!
That could be the wrinkle.
Thus, AAF may want to hang it’s hat on getting PAB’s because it received Title 23 funding, if DOT can produces any documentation to that effect.   But one would think the Title 23 funding would have gone to railway-highway crossings and that would have been for FECR, a separate entity.
It is critical to note that “The Project” is always used to refer to AAF and “The Corridor” has always been the reference for FECR.