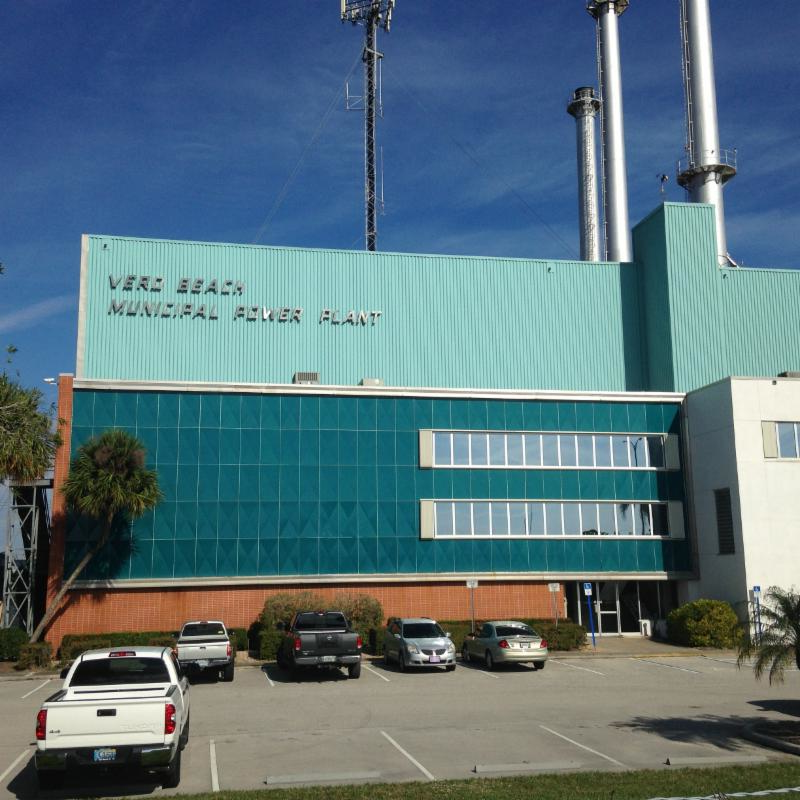 Vero Beach Municipal Power Plant
Here is the gist of the Joint Vero Beach Utilities / Finance Commission Meeting on Tuesday, June 9.
The meeting centered around a June 3 memorandum to the Commissions from James R. O’Connor, City Manager; Ted Fletcher, Interim Director of Electric Utility; Robert Scheffel Wright, Special Counsel; and William H. Herrington, Power Supply Consultant.
The City electric rates have been locked in through its long-term power supply contracts, and are higher than it wishes and it is undertaking steps to reduce its costs.
The city receives power from three sources: The Municipal Power Plant pictured above (Big Blue), the Florida Municipal Power Agency (FMPA) and the Orlando Utilities Commission (OUC).
According to the June 3 memorandum, the only alternative to reduce rates is to negotiate new rates with the Orlando Utilities Commission, since its “FMPA contracts have been validated, in accordance with Florida Statutes, by the Florida courts, and accordingly, any efforts to modify them are at best impractical, and practically impossible.”
When the city entered into it’s contract with OUC in April 2008, the agreement could be amended or terminated.
As such, “in the summer of 2014, City Staff began discussions with OUC senior management toward modification or amendment of the 2008 agreement.”  In its current negotiations, the City is in a position of having to accept the latest OUC proposals, negotiate down their proposals or pursue another bulk energy supply.
Attorney Wright has represented the City in its talks with OUC and indicated was anticipating a meeting with OUC the next day. Attorney Wright
Mr. O’Connor, Director Fletcher, Attorney Wright and Consultant Herrington want to pursue a “Go To Market” strategy, where the City would enter into a new Power Purchase Agreement (PPA) with a supplier chosen through a market Request for Proposal – type process.
Should the City terminate its PPA with OUC, it would make “termination payments” to OUC of $ 25 million; but those could potentially be financed in a manner that would “enable the City to have relatively stable bulk power supply costs over the next five to eight years.”
And if going to market RFP process indicates the City could achieve lower rates elsewhere, then that would enhance the City’s negations with OUC.
The committees unanimously voted to “recommended to the City Counsel that the City continue discussions with OUC toward reaching an amended PPA that produces relatively close to the results that Staff and Mr. Herrington believes the City would achieve by pursuing the Go To Market option.  In order to facilitate timely City action, Staff further recommended that the City develop in issue a RFP to confirm current market conditions and opportunities.”
Mr. O’Connor indicated the RFP’s could be on the street in four months. Attorney Wright said he expected eight to ten suppliers to respond.
Finally, the memorandum emphasized that: “The decisions made here are inherently long-term, multi-million dollar decisions, and as with any long-term decision that depends on market forces, continued operation of generating facilities that supply the City’s power, and many other factors. There are risks inherent in whatever decision the City makes regarding its future power supplies.”
The recommendation will be presented to the City Council next Tuesday evening, May 16 for further action.