ACCORDING TO PBS.ORG “CHARTER SCHOOLS ARE ONE OF THE FASTEST GROWING INNOVATIONS IN EDUCATION POLICY, ENJOYING BROAD BIPARTISAN SUPPORT FROM GOVERNORS, STATE LEGISLATORS AND PAST AN PRESENT SECRETARIES OF EDUCATION.”

Since 1996, the number of charter schools in Florida has grown to over 652 in 2015-2016. Charter school student enrollment in Florida now tops 269,000 students.  “They are very popular – and among the fastest growing school choice options in Florida.  Charter schools are largely free to innovate, and often provide more effective programs and choice to diverse groups of students.” (Source: Florida Department of Education)

There are five charter schools in Indian River County:

Before we look at the Indian River County metrics, here’s a little background.

Charter schools are non-profit 501(c)(3) organizations that have a contract or charter to provide the same educational services to students as district public schools. They are nonsectarian public schools that operate with freedom from many of the regulations that apply to traditional public schools.

Charter schools are accountable to their sponsor, usually a state or local school board, to produce positive academic results and adhere to the charter contract. In our case, the sponsor is the School District of Indian River County.

Charter schools are public schools that operate under a performance contract, or a “charter” which frees them from many regulations created for traditional public schools while holding them accountable for academic and financial results.

The basic concept of charter schools is that they exercise increased autonomy in return for this accountability. They are accountable for both academic results and fiscal practices to several groups: the sponsor that grants them, the parents who choose them, and the public that funds them.

The concept of a “Charter” school was put forth by New England educator Ray Budde who was interested in organizational theory. In 1974, Mr. Budde presented the Society for General Systems Research some ideas for the reorganization of school districts in a paper he titled “Education by Charter.”

Mr. Budde was an assistant professor at the School of Education at the University of Massachusetts, Amherst.

Mr. Budde’s ideas fell on deaf ears. No one felt there was a significant enough problem to require such a restructuring.

That was until the 1980s when everyone began talking about “restructuring” based on a Nation At Risk report, a Carnegie Forum report and all the media attention that followed.

Using this opportunity Mr. Budde “dusted off his paper and in early 1988 got it published by the Northeast Regional Lab. He sent it around widely; even to then-President George H.W. Bush. Then he waited. And waited. One Sunday in July Budde’s wife Priscilla put down the newspaper and said: ‘Hey, Ray, you’ve made the New York Times!’ And she showed him the column reporting the American Federation of Teachers’ support for the idea of teachers setting up autonomous schools. AFT President Al Shanker had in fact floated the proposal in a talk at the National Press Club in the spring of that year. He said Ray Budde had the best name for these schools: ‘charter schools.'” (Source: education/evolving; A joint venture of the Center for Policy Studies and Hamline University)

Al Shanker widely publicized the idea that local school boards could charter an entire school with union and teacher approval.

In the late 1980’s Philadelphia started a number of schools-within-schools of choice.  The idea gained further momentum in Minnesota which, in 1991, passed the first Charter School Law, followed by California in 1992.  By 1995, 19 states had signed laws allowing for creation of charter schools.  By 2003 the number increased to 40 states, Puerto Rico and the District of Columbia.

In his 1997 State of the Union Address, former President Bill Clinton called for the creation of 3,000 charter schools by the year 2002.  In 2002 President George W. Bush called for $ 200 million to support charter schools.  His proposed budget called for another $ 100 million for a new Credit Enhancement for Charter Schools Facility Program.

Most recently, on September 28, 2015, the U.S. Department of Education awarded new grants totaling more than $157 million through its Charter Schools Program (CSP), which funds the creation and expansion of public charter schools across the nation.

Since the program’s inception, the Department has invested over $3 billion in the charter school sector, and worked to strengthen accountability and quality of charter schools that are creating opportunities for students facing challenging circumstances.

According to a 2013 study by Stanford University’s Center for Research on Education Outcomes (CREDO), the relative performance of charter schools compared to traditional schools has improved each year. The most recent CREDO study showed that charter school students in urban areas gain roughly 40 days of additional learning per year in math and 28 additional days of learning per year in reading.

Back here at home, the Florida Charter School Statutes require charter schools to be guided by the following principles:

◦ Increase learning opportunities for all students, with special emphasis on low-performing students and reading

◦ Create new professional opportunities for teachers, including ownership of the learning program at the school site

◦ Encourage the use of innovative learning methods

◦ Expand the capacity of the public school system

Now to the metrics we referred to in the title of our article as to how “Charter Schools in Indian River County are Flourishing, Despite the Facts.”

Although difficult to read, what it shows, as highlighted in yellow, is year-by-year student enrollment metrics.

Once again, although hard to read, the next chart compares grades for all Indian River County schools, as determined by the Florida Department of Education.

In 2014 all charter schools except two received an A.  Imagine Schools at South River and Sebastian Charter Junior High School received a B. 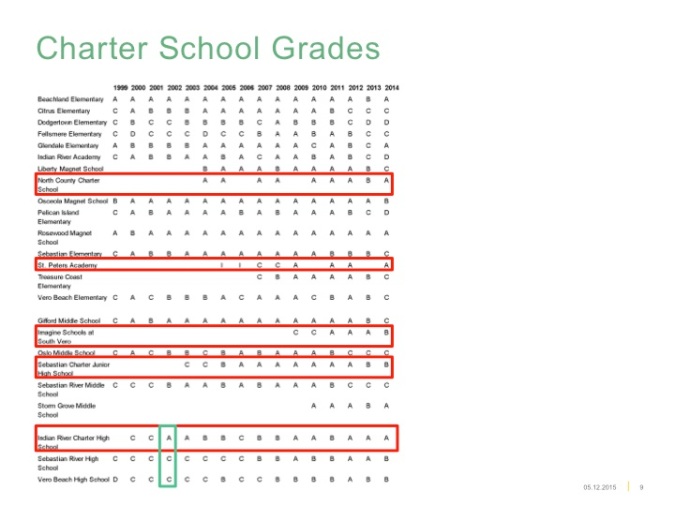 Here is a link to a Florida Department of Education white paper if you wish to read how these grades are calculated.  Also, if you wish to receive a larger image of these charts please reply.

Now, to the “Myths” versus “Facts” as published by the U.S. Chamber of Commerce Foundation:

FACT: Charter public schools are generally required to take all students who want to attend. If there are more interested students than available seats, the schools are generally required to hold lotteries, which randomly determine which students will be enrolled. According to federal law, they must accept all students, including students with disabilities and English Learners (ELs), regardless of previous academic performance.

MYTH: “Charter schools get more money than other public schools.”

Moreover, in many states, charter schools get no public funding for facilities. Across the country, charter schools receive nearly 30 percent less per pupil per year in funding than neighboring traditional public schools.

FACT: Charter schools introduce an unprecedented level of accountability into public education. If a public charter school is not improving student achievement as laid out in its foundational charter agreement, it can be closed down.

FACT: Refer to the two CREDO studies referred to above.

MYTH: “Charter schools aren’t the incubators of innovation that they claim to be.”

FACT: Public charter schools are using their autonomy to push boundaries to better serve students, generating lessons that can be refined and shared throughout the broader public school system. For example, charter schools are developing next generation learning models that rethink the meaning of the word “classroom.” Blended learning schools use technology to change the dynamics of the classroom, combining virtual classroom time with classroom time in a physical school building. By using online instruction, students can learn from experts located anywhere in the world.

One thought on “Charter Schools in Indian River County are Flourishing, Despite the Myths. Check out the Metrics.”